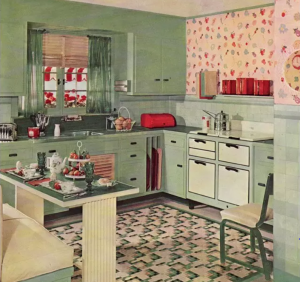 The 1920s kitchen was largely a reaction to the stylistic excess that was so characteristic of the 19th century. Over-the-top patterns and ornate details were out, with a pure white aesthetic taking their place as seen in this image from Antique Home Style. The all-white color palette was a perfect representation of the utilitarian vibes of that time. 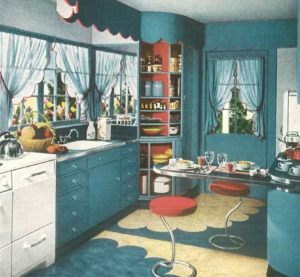 Another kitchen from Antique Home Style shows that ’30s kitchens were a far cry from the white kitchens of the ’20s, infused with colorful optimism to combat the darkness of the Great Depression. Greens, yellows and browns reigned supreme as curvy shapes and more sheen creeped in.

With World War II underway, the United States’ patriotism was in full swing, and while aesthetics were less of a priority in this resource-depleted time (even though the above kitchen via The Spruce would tell otherwise from the decade), displays of the patriotic colors of red, white and blue became pervasive ways to express country pride. 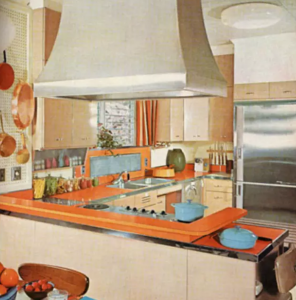 The post-war 1950s were an optimistic time while being largely informed by old-school values. Suburban ranch houses were the norm, featuring the cheerful hues of mint green, turquoise and soft yellow (this image shown here is from an old Sear Home). On the other end of that happy sock-hop look was darker, moodier rustic kitchens (but this is a story about color, so let’s move on!). 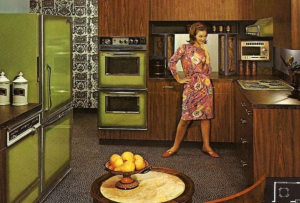 The feeling of sexual freedom and spiritual liberation of the ’60s most certainly made its way into kitchen colors, which were all about showing personality. Hem lines in fashion got shorter, and home decor became brighter! Psychedelic hues like neon green, punchy turquoise and acid orange are now synonymous with this decade. (How boss is this kitchen from House Beautiful?) 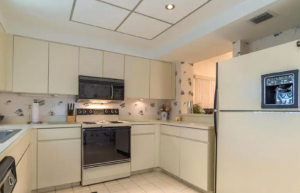 Piggybacking off the bold color story of the ’60s, 1970s kitchens were also colorfully potent but leaned more toward golds, greens, and browns (with lots of wood accents). Think heavily grained wood cabinets and avocado green appliances (this ad from GE, found via GardenWeb is the perfect example!). Everything was just a little earthier (speaking both in terms of culture and design). 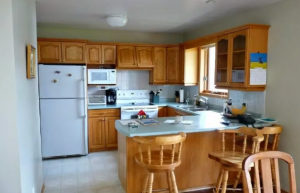 With visually stunning cultural influences like David Bowie and “Miami Vice” taking over, the 1980s were all about being flashy and bold and not the least bit subtle, except well, in the kitchen. Beige, brown, peach and floral wallpaper could be found anywhere from the floor to the ceiling, all lit from spotlight-quality track lighting. Cabinet styles ranged widely, from glossy Euro-style modern fronts to the off-white Formica versions shown here from Mirrow 80.

Though color and fashion trends from the previous decade trickled into the earlier part of the last 10 years of the 20th century, the 1990s kitchen was a little more country. Oak cabinetry was all the rage, paired with colored formica in hues like mint green. And you can’t forget the vinyl flooring, can you? (This shot from House of Turqouise is actually the “before” of a much-needed makeover).

Kitchen cabinets have been receiving quite the modular outlook in recent times and designers are of the belief that this wave of stylisation is going to continue. So, what about the trends in 2019? Here is a comprehensive look at some of these trends for a lover of modular kitchen and furniture style aficionado.

Clever, Concealed Storage/Storage that is Concealed

The concept behind creating storage units which are concealed as part of the kitchen walls is to create the sense that only the user of the kitchen knows where every particular thing rests. These cabinets are usually colored the exact same as the kitchen walls. They create a visual illusion of a false wall, and the doors of each cabinet are crafted in a manner which ensures that at a single glance they seem integrated into this wall. This theme runs throughout the entire kitchen creating a clever network of sorts of cabinets and drawers. This is one of the most notable designs in the modern kitchen setting.

Pewter and Gunmetal Hardware/More use of Gunmetal

A general trend towards the vintage has become common in the interior designing sector, and this effect is also showing onto the kitchen cabinet stylisation. Pewter and gunmetal have become some of the major forms of this designing style. Metal hardware such as sink heads, etc. are being designed using this material. In order to provide a sense of compliment, the kitchen cabinets are also being fitted with gunmetal and pewter handles, or lining work. So, if you are someone who is a purveyor of the vintage taste, this modern stylization should suit you perfectly.

Open Shelving/Open Shelves on the Countertop 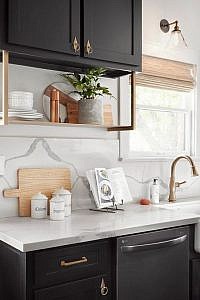 While on one end of the spectrum we have absolutely concealed shelves, on the other end open shelves are making a comeback. Open shelves were common before the introduction of kitchen cabinets to the world. However, now these cabinets are carrying extensions at the bottom which work as hanging shelves. These highly stylised shelves are conjoined to the kitchen cabinets and they are perfect for storing cutlery or designer elements such as kitchen plants.

The vintage aura of 21st-century interior designing is definitely one of its better points. And when this rubs onto the kitchen cabinet stylization a mixture of the early days of lush cabinetry and the modern sense of utilitarianism is brought together. This has led to the creation of amazing pieces of kitchen furniture.

Colored Upholstery/More Color Games than before 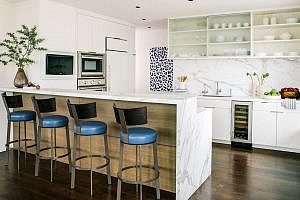 Adding color to the kitchen has been a 21st-century thing, which previously was usually kept monochromatic. But since one end of the interior designing process always ensures that the styles remain chic, in case of kitchen cabinets this has been brought forth through the use of multicolored upholstery. To be honest, they look great in modular homes.

Use of Wood/Return of the Vintage Wood

Jumping back on the vintage train, the future of kitchen cabinets looks very much wooden. Apart from the stylization factor, wooden furniture lasts much longer and faces less weather damage. And hence, the use of wood as the primary material in crafting kitchen cabinets have once again re-emerged. Some of the wooden kitchen cabinet styles are at the helm of the industry right now and can be one of the most strong vintage additions to your home. 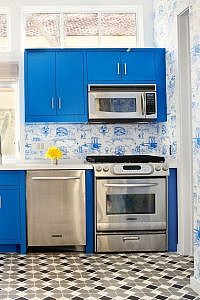 It was usually the norm that all the cabinets in the entire kitchen would be colored and crafted in a similar manner. However, this trend is being broken and replaced with cabinets which fit into the vibe of one part of the kitchen being different from the other. Many are also opting for one of the kitchen walls to have funky colors or maybe carry a mural. And the cabinets which run along these walls are also being designed in similar manners. This contrast of colors and designs make for a fun-filled and refreshing kitchen experience. 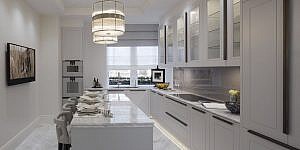 Another fun new trend which has appeared in the world of kitchen cabinets is to bring about a sharp contrast between the textures and colors of either the various cabinets, or between the cabinet texture and the upholstery, or even between the kitchen walls and the cabinets. This makes the uber modern cabinets stand out and pour their style aura onto the rest of the space. Contrasts have always been a very important segment of interior designing and now it is heavily influencing kitchen cabinet styling.

This is the age of technology and thus digitalization of every process is a must. Some examples are integrated freezer cabinets, to cabinet wine dispensers, etc. Kitchen cabinets are also taking on futuristic roles and these will become a major trend in times to come. Kitchens are being modernized not only in a sense of style but also purpose, and the cabinets serve a major role in this process. So, for anyone who is geeking out for some technology, your kitchen space is now ripe for the taking.